The sex slave is and was an integral part of the Arab slave trade.  Many famous people have written about the Corsairs and barbary raids.  Some famous artists painted scenes of this practice.  One such person is Leone Gerome.   Accoring to wikipedia:


Jean-Léon Gérôme (11 May 1824 – 10 January 1904) was a French painter and sculptor in the style now known as Academicism. The range of his oeuvre included historical painting, Greek mythology, Orientalism, portraits and other subjects, bringing the Academic painting tradition to an artistic climax. He is considered one of the most important painters from this academic period, and in addition to being a painter, he was also a teacher with a long list of students. 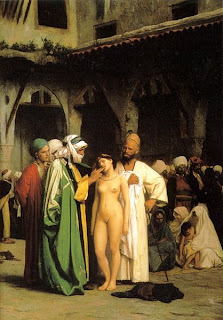 The Arab slave trade was the practice of slavery in the Arab world, mainly in Western Asia, North Africa, East Africa, and certain parts of Europe (such as Iberia and Sicily) during their period of domination by Arab leaders. The trade was focused on the slave markets of the Middle East, North Africa and the Horn of Africa. People traded were not limited to a certain race, ethnicity, or religion, and included Arabs and Berbers, especially during the trade's early days.

During the 8th and 9th centuries of the Fatimid Caliphate, most of the slaves were Slavic Eastern Europeans (called Saqaliba). However, slaves were drawn from a wide variety of regions and included Mediterranean peoples, Persians, Turkic peoples, peoples from the Caucasus mountain regions (such as Georgia, Armenia and Circassia) and parts of Central Asia and Scandinavia, English, Dutch and Irish, Berbers from North Africa, and various other peoples of varied origins as well as those of African origins. Toward the 18th and 19th centuries, the flow of slaves from East Africa increased with the rise of the Oman sultanate which was based in Zanzibar. They came into direct trade conflict and competition with Portuguese and other Europeans along the Swahili coast.

Historians estimate that between 10 and 18 million Africans were enslaved by Arab slave traders and taken across the Red Sea, Indian Ocean, and Sahara desert between 650 and 1900.[1][2][3][4] The term Arab when used in historical documents often represented a cultural term rather than a "racial" term, and many of the "Arab" slave traders such as Tippu Tip and others were indistinguishable from the "Africans" whom they enslaved and sold. Due to the nature of the Arab slave trade it is also impossible to be precise about actual numbers.[5][6][7] Additionally, approximately 11 -15 million African captives were taken to the Americas. Many died in the capture, on the ships, and in the dungeons in Africa. Likewise, some estimate that more than 2 million Africans died on the ships before reaching the destinations in the Arab world.[citation needed]

To a smaller degree, Arabs also enslaved Europeans. According to Robert Davis between 1 million and 1.25 million Europeans were captured by Barbary corsairs, who were vassals of the Ottoman Empire, and sold as slaves between the 16th and 19th centuries.[8][9] These slaves were captured mainly from seaside villages from Italy, Spain, Portugal and also from more distant places like France or England, the Netherlands, Ireland and even Iceland.[10] The impact of these attacks was devastating – France, England, and Spain each lost thousands of ships, and long stretches of the Spanish and Italian coasts were almost completely abandoned by their inhabitants. Pirate raids discouraged settlement along the coast until the 19th century.[11][12]

Periodic Arab raiding expeditions were sent from Islamic Iberia to ravage the Christian Iberian kingdoms, bringing back booty and slaves. In a raid against Lisbon in 1189, for example, the Almohad caliph Yaqub al-Mansur took 3,000 female and child captives, while his governor of Córdoba, in a subsequent attack upon Silves in 1191, took 3,000 Christian slaves.[13]

The Ottoman wars in Europe and Tatar raids brought large numbers of European Christian slaves into the Muslim world too.[14][15][16]

The 'Oriental' or 'Arab' slave trade is sometimes called the 'Islamic' slave trade, but a religious imperative was not the driver of the slavery, Patrick Manning, a professor of World History, states. However, if a non-Muslim population refuses to adopt Islam or pay the jizya protection/subjugation tax, that population is considered to be at war with the Muslim "ummah" (nation) and therefore it becomes legal under Islamic law to take slaves from that non-Muslim population. Usage of the terms "Islamic trade" or "Islamic world" has been disputed by some Muslims as it treats Africa as outside of Islam, or a negligible portion of the Islamic world.[17] Propagators of Islam in Africa often revealed a cautious attitude towards proselytizing because of its effect in reducing the potential reservoir of slaves.[18]


The Corsair was the slave collector. 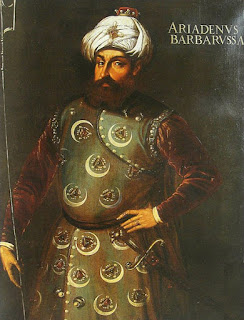 The Barbary pirates, sometimes called Barbary corsairs or Ottoman corsairs, were pirates and privateers who operated from North Africa, based primarily in the ports of Tunis, Tripoli and Algiers. This area was known in Europe as the Barbary Coast, a term derived from the name of its Berber inhabitants. Their predation extended throughout the Mediterranean, south along West Africa's Atlantic seaboard and even South America,[1] and into the North Atlantic as far north as Iceland, but they primarily operated in the western Mediterranean. In addition to seizing ships, they engaged in Razzias, raids on European coastal towns and villages, mainly in Italy, France, Spain, and Portugal, but also in the British Isles, the Netherlands and as far away as Iceland. The main purpose of their attacks was to capture Christian slaves for the Islamic market in North Africa and the Middle East.[2]


I find it interesting that American schools don't teach this history.  I wonder why and I have a few ideas as to why "certain individuals" want to keep this history, hidden.  Take a good look at what that corsair looks like (he sure doesn't look European).


While Barbary corsairs naturally looted the cargo of ships they captured, their primary goal was to capture and enslave people on land or at sea. The slaves were often sold or put to work in various ways in North Africa.

Historian Robert C. Davis estimated that between 1530 and 1780 1–1.25 million Europeans were captured and taken as slaves to North Africa, principally Algiers, Tunis, and Tripoli, but also Istanbul and Salé.[21]

Sultan of Morocco, by Eugène Delacroix

Being captured was just the first part of a slave's nightmare journey. Many slaves died on the ships during the long voyage back to North Africa due to disease or lack of food and water. Those who survived the journey were made a spectacle of as they walked through town on their way to the slave auction. The slaves would then have to stand from eight in the morning until two in the afternoon while buyers passed by and viewed them. Next came the auction, where the townspeople would bid on the slaves they wanted to purchase and once that was over, the governor of Algiers (the Dey) had the chance to purchase any slave he wanted for the price they were sold at the auction. During the auctions the slaves would be forced to run and jump around to show their strength and stamina. After purchase, these slaves would either become slaves for ransom, or they would be put to work. Slaves were used for a wide variety of jobs, from hard manual labor to housework (the job assigned to most women slaves). At night the slaves were put into prisons called 'bagnios' that were often hot and overcrowded. However, these bagnios began improving by the 18th century, and some bagnios had chapels, hospitals, shops, and bars run by slaves, though such amenities remained uncommon.


Raids on all of Europe occurred by these Corsairs.  A few Englishmen even learned to be corsairs fromt these slave traders.

The Barbary slave trade refers to the slave markets which flourished on the Barbary Coast, or modern day Morocco, Algeria, Tunisia and western Libya between the 16th and 19th centuries. These markets prospered while the states were nominally under Ottoman rule, but in reality were mostly autonomous. Although the slave markets were filled by peoples from many places, they were distinct from other slave markets because they also sold European slaves, acquired through pirate raids on shipping or coastal towns and villages. About 20,000 British and Irish captives were held in North Africa from the beginning of the seventeenth century to the middle of the eighteenth, and roughly 700 Americans were held captive in this region as slaves between 1785 and 1815.[1] The markets declined after the loss of the First and Second Barbary Wars and ultimately ended in the 1830s when the entire area came under French rule.

In the first years of the 19th century, the United States of America and some European nations fought and won two the First Barbary War and the Second Barbary War against the pirates. After an Anglo-Dutch raid on Algiers in 1816 immobilized most of the Pirate fleet, the Dey of Algiers was forced to agree to terms which included a cessation of the practice of enslaving Christians, although slave trading in non-Europeans could still continue. After losing in this period of formal hostilities with European and American powers, the Barbary states went into decline. However, the Barbary pirates did not cease their operations, and another British raid on Algiers took place in 1824. Finally, France took control of Algiers and Tunis in 1830 and 1831, respectively. Tripoli returned to Ottoman control in 1835, before finally falling into Italian hands in 1911. As such, the slave traders now found that they had to work in accordance with the laws of their governors, and could no longer look to self-regulation. The slave trade finally ceased on the Barbary coast when European governments passed laws granting emancipation to slaves.


Once again, America fought to end slavery just as over one million people (mostly men) were killed in America, during the American Civil War to end this practice and keep the Union, united.  What other country has fought to end slavery?  America more than made up for its role in slavery and most of that role was done by elites who were never properly punished and probably still benefit from it in their royal houses.  The next line of action in the future will be against the mental disorder that justifies this heinous crime.


Slavery can be traced back to the earliest records, such as the Code of Hammurabi (c. 1760 BC), which refers to it as an established institution.[3] Slavery is rare among hunter-gatherer populations as slavery depends on a system of social stratification. Slavery typically also requires a shortage of labor and a surplus of land to be viable.[4] David P. Forsythe wrote: "The fact remained that at the beginning of the nineteenth century an estimated three-quarters of all people alive were trapped in bondage against their will either in some form of slavery or serfdom."[5]

Slavery is no longer legal anywhere in the world.[6] Mauritania abolished it in law in 1981[7] and was the last country to do so – see Abolition of slavery timeline. However, the number of slaves today is higher than at any point in history,[8] remaining as high as 12 million[9] to 27 million.[10][11]

Slavery was known in civilizations as old as Sumer, as well as almost every other ancient civilization, including Ancient Egypt, Ancient China, the Akkadian Empire, Assyria, Ancient India, Ancient Greece, the Roman Empire, the Islamic Caliphate, and the pre-Columbian civilizations of the Americas.[12] Such institutions were a mixture of debt-slavery, punishment for crime, the enslavement of prisoners of war, child abandonment, and the birth of slave children to slaves.[13]

Posted by RitaJeanMoran at 4:37 PM